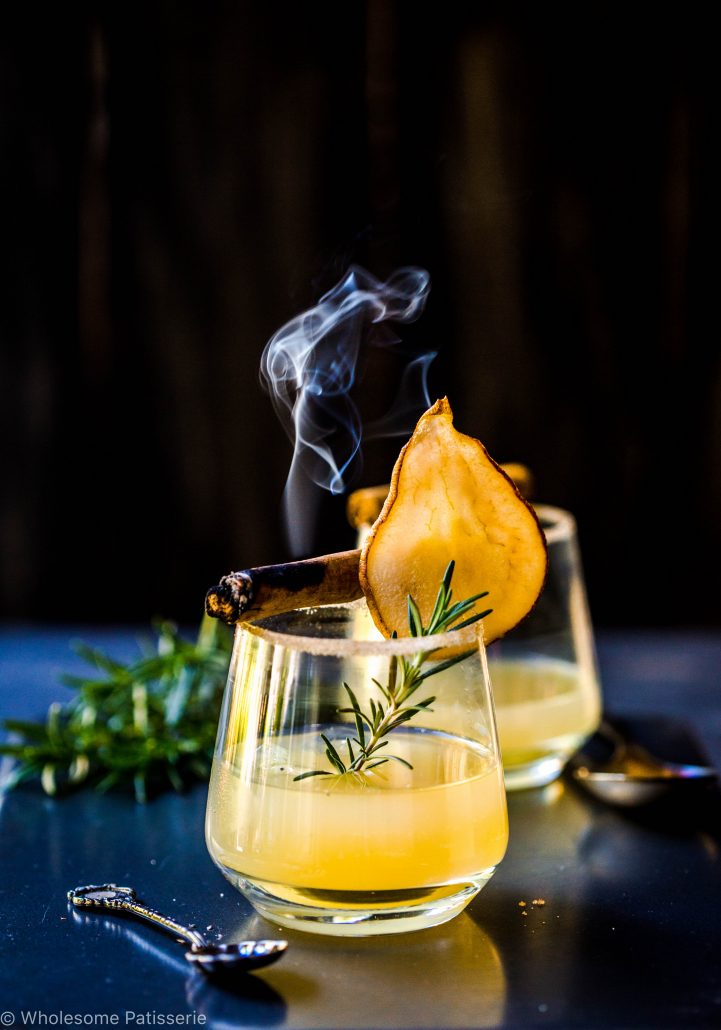 It’s cocktail time! Or mocktail, completely up to you! Just omit the vodka and enjoy a delicious and refreshing glass!

So I very rarely drink alcohol, only if I’m out to dinner with my friends or family and I may sneak a glass of Moscato, my favourite wine if I had to choose one. I’m also very partial to Piña Colada’s and Mojitos, oh and Moscow Mules! I promise I don’t drink that often.. 😉 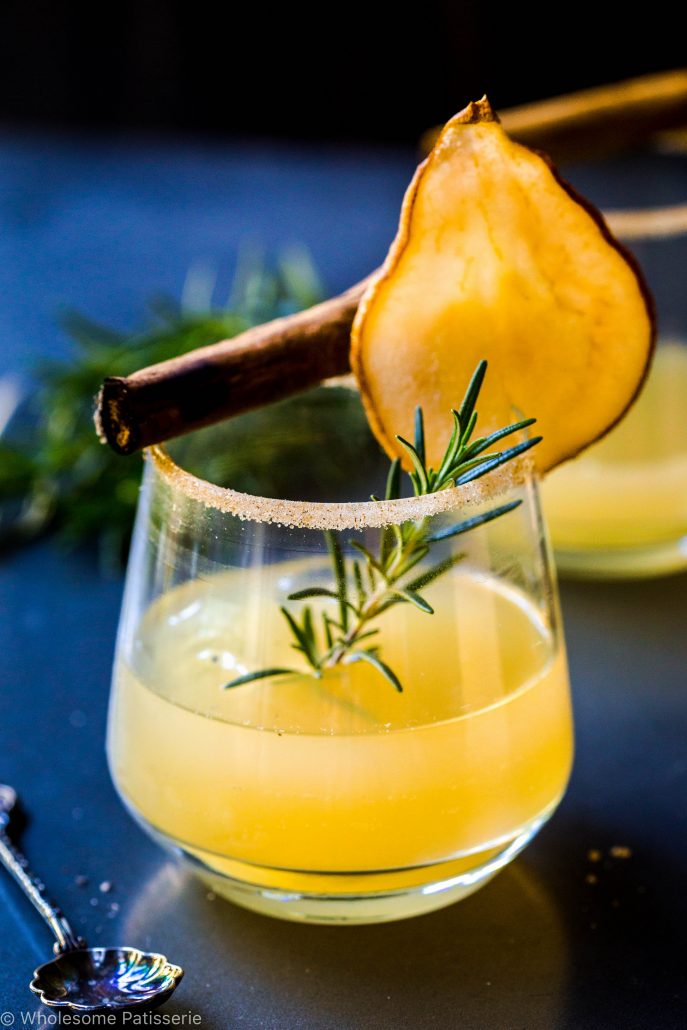 I thought it would be a fun idea to include kombucha in a cocktail! As I said though, you can easily make this a beautiful refreshing beverage non-alcoholic by not adding the vodka, simple! I love using Remedy Kombucha, the best! I decided to add their Original Kombucha flavour for this fizz cocktail and flavour it with pear and lemon. Garnish it with fresh rosemary and cinnamon sticks and you’ll have yourself a delightful autumn drink to enjoy!

What’s your favourite cocktail/mocktail? I’ve listed mine! I want to make more mocktails too but I thought why not just combine the two and give you the best of both worlds, winning! 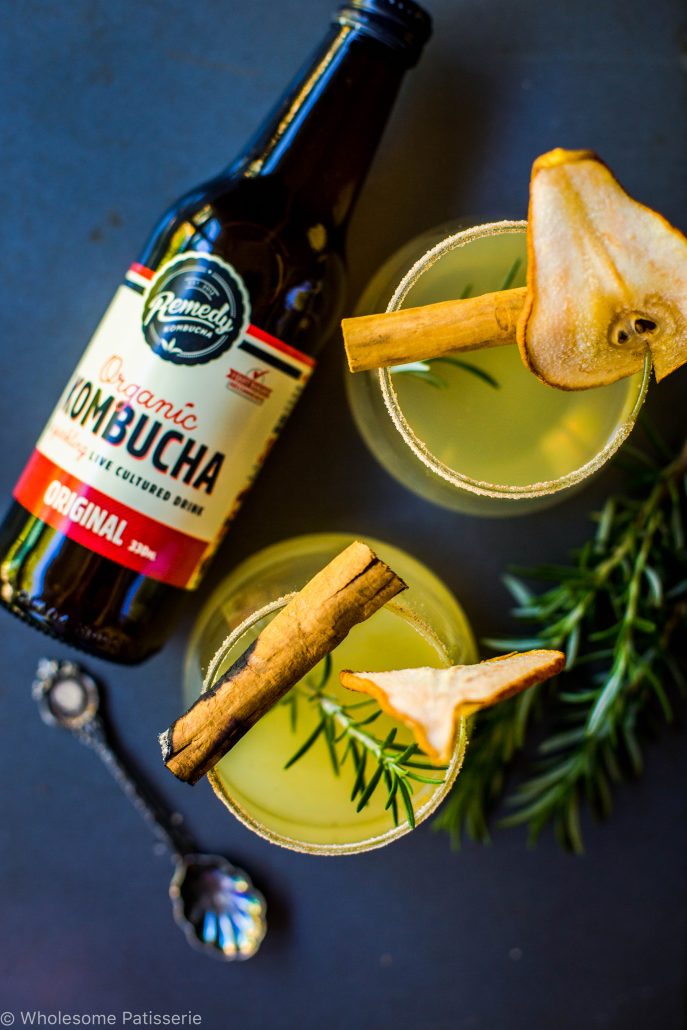 Can we just take a moment to appreciate pear juice? Oh my goodness me! I love to eat pears but never really enjoyed a glass of pear juice. It’s so refreshing! Yes the pear juice I used is from concentrate but I’ll for sure make up a fresh batch of homemade pear juice soon. I’m guessing that will take a whole lot of pears yeah? Paired with fresh lemon juice which gives this drink a pleasant sour flavour complimented beautifully with the pear juice. You can also garnish your drinks with dehydrated slices of pear, just for looks really but a great palate cleanser after you finish off your drink.

How fun is that smoke coming off of the cinnamon stick?! That was actually my inspiration to make this drink, the smoke, for the photo!! Hehe!!! I cannot resist an epic photo opportunity, especially those action shots. Of course you don’t have to burn your cinnamon stick, that was just for the photos., I guess it would give off more cinnamon flavour though? Unless you burn it, like I did, oops, don’t try that at home! I had my camera on a timer whilst I sat there with my lighter until a got a decent smoke coming off the cinnamon stick, just like blowing out your birthday cake candles, yay!

Stir your cinnamon stick into your drink to add that extra earthy flavour. It’s a party in your mouth really! I hope you enjoy this cocktail, so refreshing, fizzy and addicting! 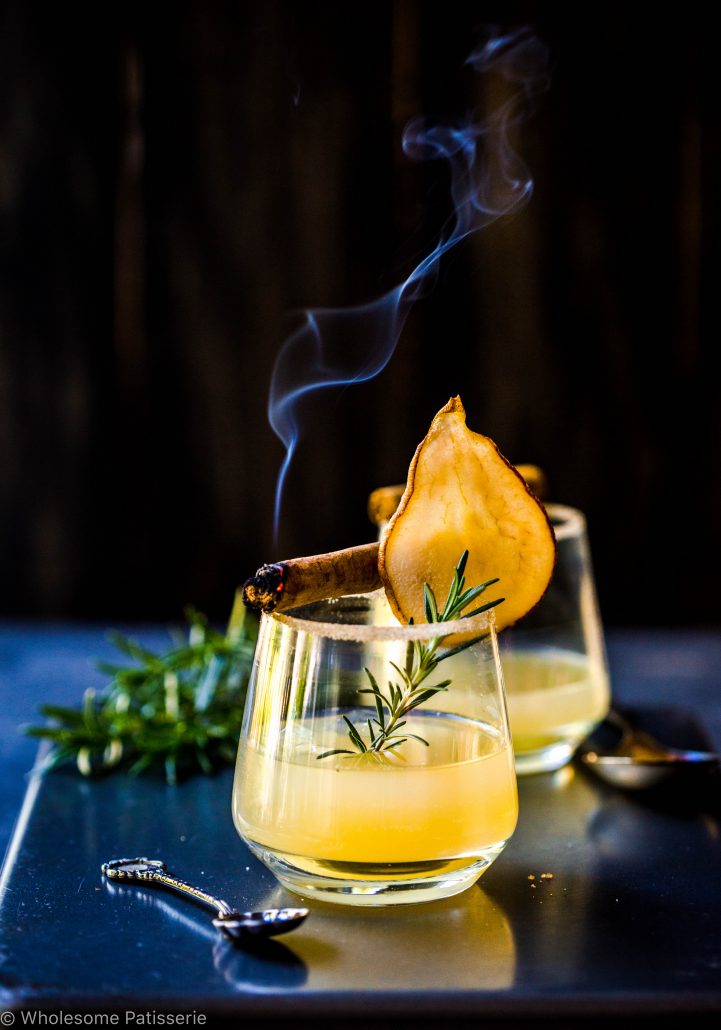